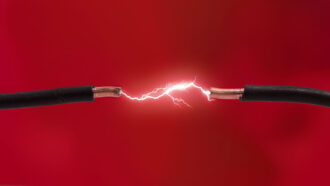 agriculture: The growth of plants, animals or fungi for human needs, including food, fuel, chemicals and medicine.

aspirin: A common non-prescription drug, also known as acetylsalicylic acid. For more than a century, it has been widely used to treat headaches, joint pain, muscle pain, toothaches and more. It also reduces fevers and inflammation. Ancient papyrus texts indicate that as long as 5,000 years ago, the Sumerians and Egyptians were using willow bark (the source of aspirin’s active ingredient) to treat aches and pains.

chemical: A substance formed from two or more atoms that unite (bond) in a fixed proportion and structure. For example, water is a chemical made when two hydrogen atoms bond to one oxygen atom. Its chemical formula is H2O.

compound: (often used as a synonym for chemical) A compound is a substance formed when two or more chemical elements unite (bond) in fixed proportions.

copper: A metallic chemical element in the same family as silver and gold. Because it is a good conductor of electricity, it is widely used in electronic devices.

COVID-19: A name given to the disease that erupted into a massive global pandemic in 2020. It first emerged in 2019 and is caused by a new coronavirus known as SARS-CoV-2. Symptoms in people can include pneumonia, trouble breathing, feeling too tired to walk more than a few steps, fever, headaches, low blood-oxygen levels, blood clots and brain “fog.”

crop: (in agriculture) A type of plant grown intentionally grown and nurtured by farmers, such as corn, coffee or tomatoes. Or the term could apply to the part of the plant harvested and sold by farmers.

defense: (in biology) A natural protective action taken or chemical response that occurs when a species confronts predators or agents that might harm it. (adj. defensive)

electricity: A flow of charge, usually from the movement of negatively charged particles, called electrons.

engineering: The field of research that uses math and science to solve practical problems.

expression: (in genetics) The process by which a cell uses the information coded in a gene to direct a cell to make a particular protein.

gene: (adj. genetic) A segment of DNA that codes, or holds instructions, for a cell’s production of a protein. Offspring inherit genes from their parents. Genes influence how an organism looks and behaves.

genetic: Having to do with chromosomes, DNA and the genes contained within DNA. The field of science dealing with these biological instructions is known as genetics. People who work in this field are geneticists.

high school: A designation for grades nine through 12 in the U.S. system of compulsory public education. High-school graduates may apply to colleges for further, advanced education.

immune: (adj.) Having to do with immunity. (v.) Able to ward off a particular infection. Alternatively, this term can be used to mean an organism shows no impacts from exposure to a particular poison or process. More generally, the term may signal that something cannot be hurt by a particular drug, disease or chemical.

immune system: The collection of cells and their responses that help a plant or animal fight off infections and deal with foreign substances.

infect: (n. infection) To spread a disease from one organism to another. This usually involves introducing some sort of disease-causing germ to an individual.

inflammation: (adj. inflammatory) The body’s response to cellular injury and obesity; it often involves swelling, redness, heat and pain. It also is an underlying feature responsible for the development and aggravation of many diseases, especially heart disease and diabetes.

novel: Something that is clever or unusual and new, as in never seen before.

PCR: An acronym for polymerase chain reaction. It’s a biochemical process that repeatedly copies a particular sequence of DNA.

polymerase chain reaction or PCR: A biochemical process that repeatedly copies a particular sequence of DNA. A related, but somewhat different technique, copies genes expressed by the DNA in a cell. This technique is called reverse transcriptase PCR. Like regular PCR, it copies genetic material so that other techniques can identify aspects of the genes or match them to known genes.

protein: A compound made from one or more long chains of amino acids. Proteins are an essential part of all living organisms. They form the basis of living cells, muscle and tissues; they also do the work inside of cells. Among the better-known, stand-alone proteins are the hemoglobin (in blood) and the antibodies (also in blood) that attempt to fight infections. Medicines frequently work by latching onto proteins.

range: The full extent or distribution of something. For instance, a plant or animal’s range is the area over which it naturally exists.

Regeneron International Science and Engineering Fair: (Regeneron ISEF) Initially launched in 1950, this competition is one of three created (and still run) by the Society for Science. Each year now, approximately 1,800 high school students from more than 80 countries, regions, and territories are awarded the opportunity to showcase their independent research at Regeneron ISEF and to compete for an average of almost $5 million in prizes.

salicylic acid: The main ingredient in a widely used pain reliever known as aspirin. It’s a colorless crystalline compound that tends to reduce inflammation. It takes its name from Salix, the Latin word for willow, a tree whose bark makes this compound. This same compound can also be derived from several other plant sources.

stress: (in biology) A factor — such as unusual temperatures, movements, moisture or pollution — that affects the health of a species or ecosystem.

system: A network of parts that together work to achieve some function. For instance, the blood, vessels and heart are primary components of the human body’s circulatory system. Similarly, trains, platforms, tracks, roadway signals and overpasses are among the potential components of a nation’s railway system. System can even be applied to the processes or ideas that are part of some method or ordered set of procedures for getting a task done.

tobacco: A plant cultivated for its leaves, which many people burn in cigars, cigarettes, and pipes. Tobacco leaves also are sometimes chewed. The main active drug in tobacco leaves is nicotine, a powerful stimulant (and poison).

vaccine: (v. vaccinate) A biological mixture that resembles a disease-causing agent. It is given to help the body create immunity to a particular disease. The injections used to administer most vaccines are known as vaccinations.

virus: Tiny infectious particles consisting of genetic material (RNA or DNA) surrounded by protein. Viruses can reproduce only by injecting their genetic material into the cells of living creatures. Although scientists frequently refer to viruses as live or dead, in fact many scientists argue that no virus is truly alive. It doesn’t eat like animals do, or make its own food the way plants do. It must hijack the cellular machinery of a living cell in order to survive.

voltage: A force associated with an electric current that is measured in units known as volts. Power companies use high-voltage to move electric power over long distances.